After a budy weekend all the stuff is in Nuernberg now. Below some photo's to give an idea of the 'big move operation':

The car with trailer we used. Both rented, so expensive

The weather was very nice....

This is the prove we really been a long way...

Now it is really time to leave Enschede. This log will probably not be updated for a while, because my internet capabilities in Nuernberg are not as good as here, but hopefully we will have adsl on the 10th of May.

Today we will drive to Nuernberg with the Opel Vectra station rental car and our Pak-n-Bak rental trailer and drive the 565 km to Nuernberg. Because you are only allowed to drive 80 km/h with a trailer in Germany we estimate a trip of about 10 hours. And after that we will have to bring all the stuff upstairs, about 80 steps. My friend Saron doesn't know that yet, she will hear it when we cross the border, gna gna.

Sunday back, two last days in Holland and then to Germany again... man what is moving a nice thing to do.... not!

When I was in Nuernberg for a short holiday about a month ago people kept talking to me about the famous things from Holland:

Well, Frau Antje was something new for me, because I don't like cheese (yes, I know!!) and in Holland frau Antje is not known at all. It is a typical Dutch invention for Germany, because it is the dutch cheese promotion girl in Germany.

Klompen, as we call the wooden shoes in Holland, is ofcourse something mucht easier to explain to them. Because the germans don't believe people in Holland really walk on wooden shoes I will bring a pair along to Germany: 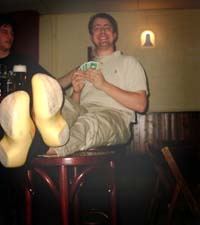 Ok, the drugs program is ofcourse always a hot topic.......I don't even want to start about that, just take a look here or here

Cleaning up after Party

Yesterday as I said before a little good bye party. Unfortunately the 'failed casino borrel' the day before gave some damage to the people who visited, so the beer-flow was steady, but much too low! Everybody left already at about one o'clock at night.

Got some very nice gifts for my survival in Nuernberg, the SOT gave me a coffee survival pack, a group of friends gave a Dutch Flag and some coupons for the home improvement market and also a bottle of wine and a box of cigars were in the package... all very nice.

So, this morning was the quick cleaning day, this was how it looked before: 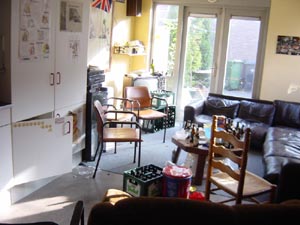 And this was after, quite ok huh? And it only took 10 minutes 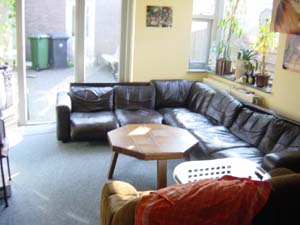 Today I baked the famous old Dutch apple pie, for the earliest visitors on my farewell party. I tried to find an english recepie for this kind of apple pie, but I could only find dutch ones. So you have to do it with a picture, click on it for a bigger one (as with most pictures on this site)