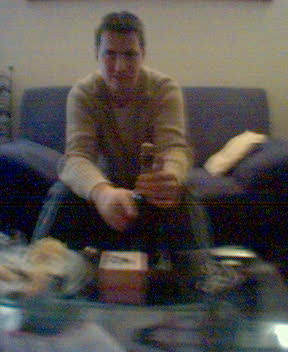 This weekend I will spend some time in Holland. I just arrived in Aachen, where I will visit Jeroen. He and his girlfriend have just moved from there appartment in the innercity of Aachen to a nice little house in one of the outskirts, looks really good. Jeroen came from Austria, where he was skiing, the )($))@$@)()@, and we met in Cologne on the trainstation.

Tomorrow we will drive all together (Jeroen, Anja and me) to Amsterdam to visit Hans, who will give hit birthday and housewarming party, because he also moved to a new appartment, although that was longer ago. And then on Sunday it will be back to Erlangen, so quite some travelling this weekend.

Yesterday I spend the day in Munich, where my boss and I had some sort of emergency-get-the-project-back-on-track and get-a-good-overview-of-the-actual-problems meeting with another department. Quite nice actually, my boss let me handle the whole meeting and I have the feeling we got some good results, all the critical points are now clear for everybody, so they can be solved (or not and we cancel it

and also the first boost for project structure went quite ok. Gives a good feeling

Direct after that we had a "Stammtisch" with the Trainee@IT programm and went for "Karpfen essen". Also very nice

So now time for some food, Jeroen and Anja are cooking for me, not bad!!

Ok, so yesterday evening we had a visit from someone to clean our house. It could not be more typical, she was a Polisch lady who lives here in Erlangen, very nice and made the impression that she knows how to handle things. Tomorrow morning she will start und we will see if our lives get more relaxed now

But I doubt it, the one stabile factor in the universe is chaos and 42, so somehow we will find a way to fill in the time the cleaning saves us and make our lives busier than ever

Dus Ja, Jeroen has not gotten an offer from Philips for my television...... sigh!!!

Luggage, it is strange to type an strange to speak.... why do the Brittish have such a word?

10 Technologies that refure to die

From typewriters to vacuum tubes, these 10 technologies arent as obsolete as you might think.

Calculate what your personal information is worth

I just discovered this site, here is a small flash-program that allows you to calculate what your personal information would be worth. Interesting