Just want to post this small lifehack I build for myself. I like to listen to the Dutch radio station 3fm when I work at home, so I had a direct link to their stream as shortcut on my desktop. But as I have installed firefox as my default media player, things became too complicated.

Clicking the link would popup firefox, which would ask me if I wanted to download the link, then on clicking yes Mediaplayer would come up and firefox would remain in the background with an empty page. Not the way I wanted to have it.

So I searched for the parameters which could be used to control Mediaplayer from the command prompt and found this site on MSDN with all information. So now I have the following command as shortcut on my desktop:

Today i felt like playing around with some software, therefore I searched the web and came up with a manual (in German) to update my O2 XDA Neo with Windows Mobile 6 aka Crossbow. This time I was clever enough to first save all of my settings and stuff with SPB Backup, as I'm not amused if I turn my mobile phone into a paper weight.

So first I backed up all of my data using this backup tool. Then I go to this page, where the manual can be found.

Oops, reading the pdf manual which is in the download I see that I have to do it using a windows XP machine. Currently I do not have this, so I'll have to get my laptop up and running. Update will follow!
Used tags: lifehack, technology, vista

I just installed the IIS on my machine, but somehow I got the following strange error:

This was caused because of the order of installation: first asp.net 2.0 and then IIS.

In order to fix it I had to install the asp.net again for IIS, using the command "aspnet_regiis -i" within the VS2005 command prompt.

And hey, suddenly it works

Next trip to Holland

This will be the third weekend on a row that I'll be traveling to the Netherlands. Last weekend we had the bachelor party of Jeroen and today he will say the important little word to his future wife, so again it is up early and getting on the train to Aachen.

update:
It was a fun party. I arrived yesterday around 11:30am in Aachen and took a cap to the hotel in Heerlen, where already a bunch of my friends were. The only stupid thing that happened was that I, not too good early in the morning, forgot to take the tree I had bought as kind of 'Giftpackage'. So this morning my train was leaving and this tree was still standing in our living room. Bad luck. But then I called Niels, who lucky enough was able to buy a tree for us on the way here. So we changed it into a real moneytree and presented it during the evening

Around 2pm we gathered in the oldest border station in the Netherlands, the home of the Zuid-Limburgse Stoom Maatschappij where the wedding ceremony was held. After the official part, which interesting enough was performed by the mother of Jeroen, we all went into the train and had a one hour ride in the classical carriages with the steam train. All very nice and typical for Jeroen

But not to worry, they arrived in a carriage with horses, so there was a good balance between the passions of bride and groom

After that we moved to the party location, where we had a very good diner and after that the party started, with several 'stukjes' which showed the lives of Jeroen and Anja from very different perspectives. Here was also the moment to give them the tree, with the classical words:

Especially the German colleagues new this of course

After the end of the party, with lost of talking and dancing, we got the taxis back to the hotel and now it is too early again, and I have to make sure I get to the train.... back to good old Germany

Hopefully the travel is reduced after this, perhaps only a short trip to the states end of October and then 3 weeks Thailand

Today I had to get up quite early because I had a train to catch to Aachen, and the thing left at 06:01 AM (!!) This meant getting up at 5am, gathering all my stuff and enjoy a 4,5 hour ride to Aachen for the bachelor party of one of my friends. It will actually be the first bachelor party I have with one of my university friends, somehow all are getting married now.... makes you wonder, doesnt' it

Anyway, we'll be with a small group, also some friends from Singapore and Washington are coming over, so there is no excuse for me not to come. The exact plan for today is of course secret (JT will probably read blogs to get info ahead

but we'll sure have some fun. The only thing I'm not too happy about is that I have to get the train back on Sunday 10am already, so that probably means not too much sleep

I just discovered that they have a lot of the short comedy factory movies on YouTube. Ofcourse our all time favorite is also there, the legendary show on the beautiful Dutch word
Used tags: funny

I just read about this on lifehacker.com, a nice tool called Display Fusionfor Windows XP and Vista users that are lucky enough to have multiple screens. This enables you to span a big picture as background across multiple screens. 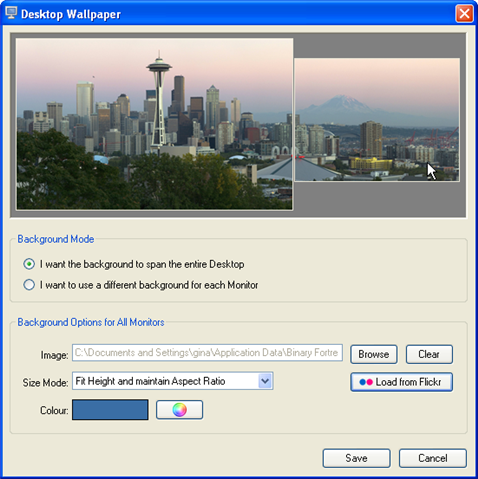 I just got mail from the VDST, our diving association. Last week I sent them a huge pack of paper to get my instructor degree for Nitrox * divers and today I got mail: 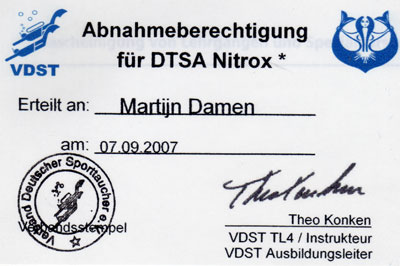 So now I'm also allowed to teach people the advantages of diving safer with enriched air ..... just give me a call if you want to know more about it!
Used tags: diving

Long weekend in the Netherlands

Tomorrow we'll drive to the Netherlands for a long weekend. We will stay at De Jagerstee, a camping in the middle of the country. I was looking forward going to Holland, but today one of my colleagues informed me that it was the last day of the holidays here, so many people will be on the road driving towards home. So that means lots and lots of traffic and probably multiple traffic jams on the road. Currently I'm guessing a seven hour drive, but we'll see where it ends.

So this was quite a short week, but still very successful as I managed to get a lot of open issues out of the way.... still busy though, because even with this 4 day week I make my hours

Just something I got today to survive this rainy day: 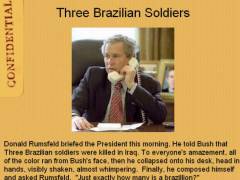 There goes an era

Below some of the images of the site, they are just too good to get lost 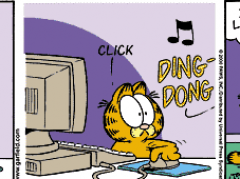 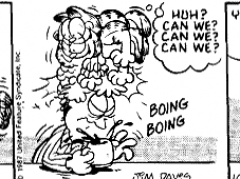 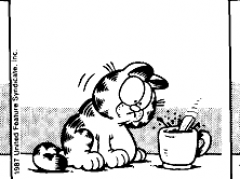 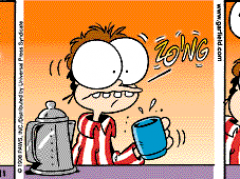 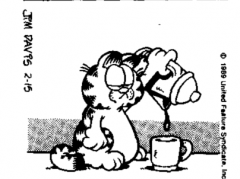 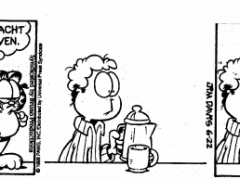 You know when you're drinking too much coffee when:

I'm cleaning up my server and it is time to lay my old coffee page to rest. I think it has been online for about 10 years now and was basically the first page I put online when studying in Enschede.

Just to ensure that this 'valuable' knowledge is not lost I will put the coffee & women as well as too much coffee here.